What do we imagine when we heard the words “moving image”? Many people will imagine the movies they see on monitors and other devices. This work is an installation in which a single point of laser light is projected and refracted using wax, packing tape, liquid, and spring motion. The glimmering and fluctuation of light in the environment around us transforms into the sparkling of fireflies or the glow of an aurora, not merely simple points and curves. This presents another form of the image, a concept that has in contemporary times lost some of its original diversity. 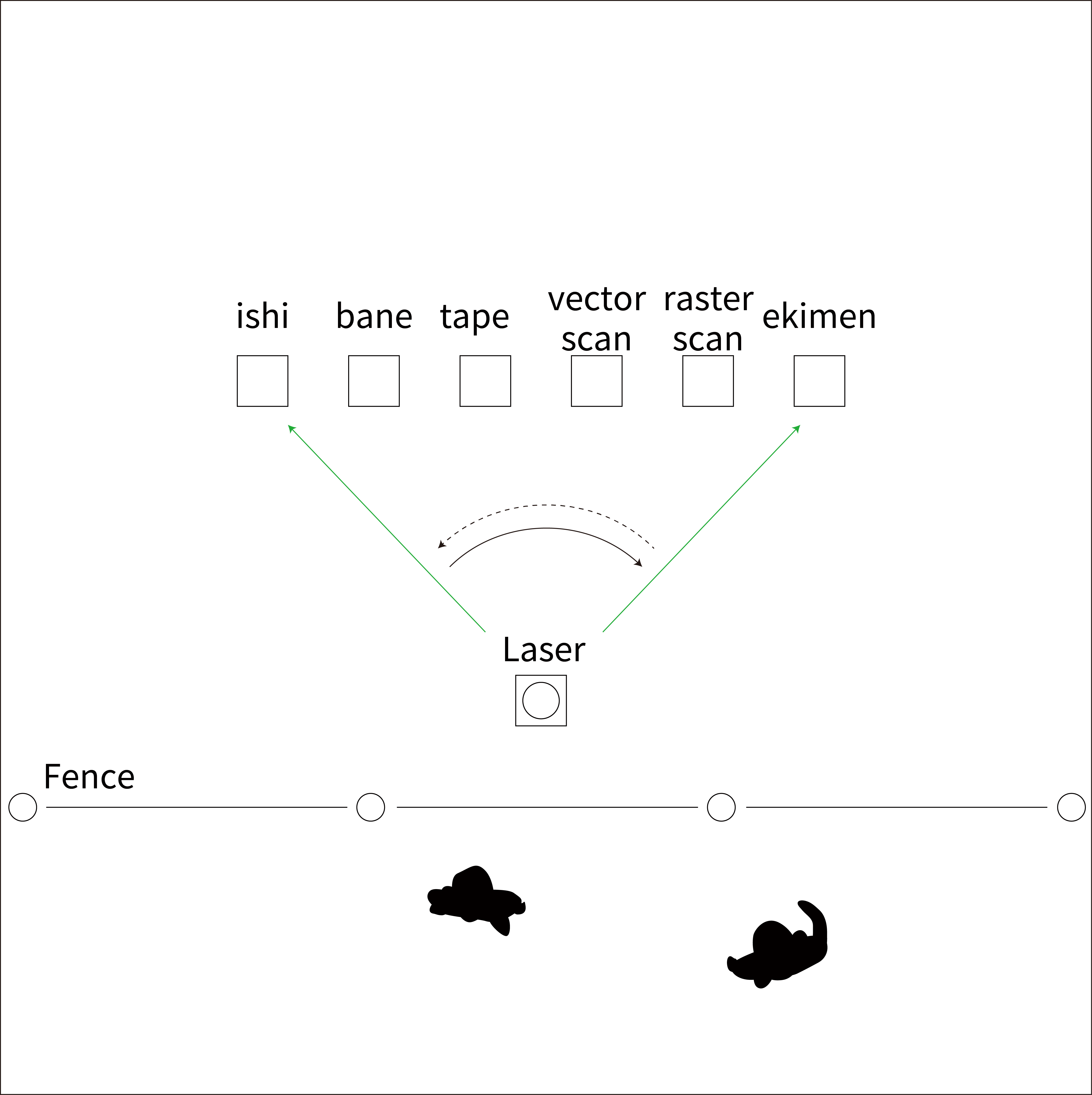 As shown in the block diagram of the figure, each module is equipped with a microcomputer base controller. The synchronization controller connected to the PC switches the timing of its driving by exchanging serial signals. The software on the PC side is created by openFrameworks, and it has functions of serial communication to the synchronous controller by a timer, function of outputting specific frequencies to the liquid level reflection module, function of sending vector data to the vector scan module, processing with a timer It has a function to reset and loop installation of the installation. 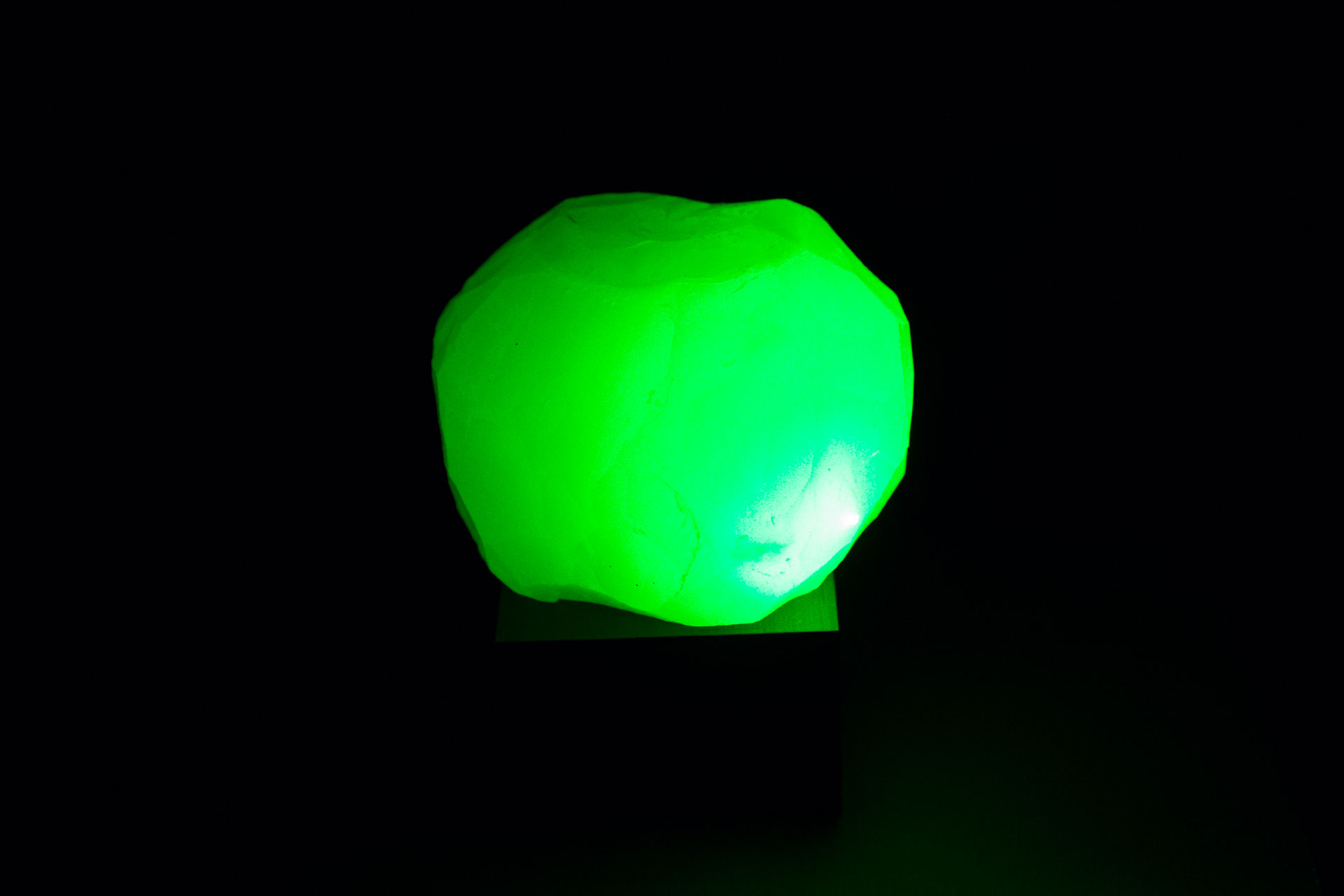 “Stone” is a module that expresses how a stone glows when a laser beam hits a stone-shaped object that sculpts paraffin. Light enters while refracting and diffusing to the inside of the stone, and the appearance of the stone being illuminated uniformly emits light in a way that it seems as if the stone itself is shining. And due to speckle noise peculiar to laser light, the surface of the stone and the surrounding light have a texture that is different from that of other than the laser. The gradually changing flashing interval of this somewhat mysterious shining stone is gradually shorter gradually, which is initially 10 seconds, and finally it flashes about 10 times per second. Meanwhile, we invite viewers to a variety of already-deceived feelings such as fireflies light, light such as flashing of modern flash light, synchronization with rhythm of breathing and heartbeat, blinking fast, chest highs and anxiety It will be. This process encourages viewers to be aware of the light source in the projector, that is, the existence of lanterns in the practice of image history. 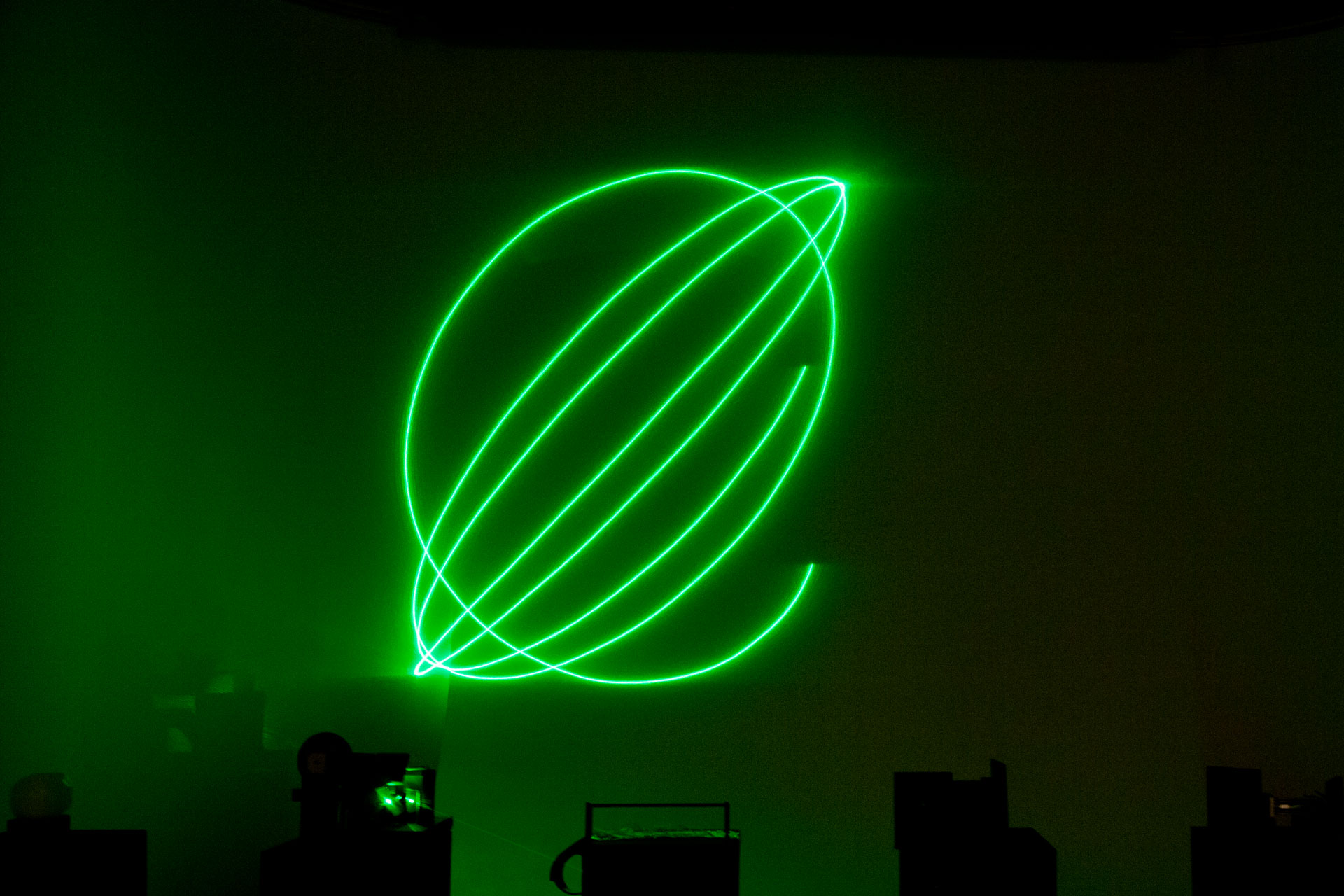 Two mirrors fixed by a spring are attached to the twist position and are repelled by an automated jig. “Spring” is a module which can see the state that the reflected light moves in the horizontal direction and the vertical direction as the mechanism is irradiated with the laser light, and as a result, it gradually attenuates while drawing the Lissajous figure.

The spring makes the viewer experience the practice of Chronophotograph. Murray says “I was thinking of a gun-like device that can take a series of birds’ actions to express continuous wing movements.” The viewer does not keep chasing the movement of the light point at the center of the field of view, but rather uses the strong afterimage effect to see the shape the trajectory of that point draws, but this is exactly what Murray says ” A photograph that can take a picture of a bird’s action “, and the viewer acts a chronograph photograph through a spring. 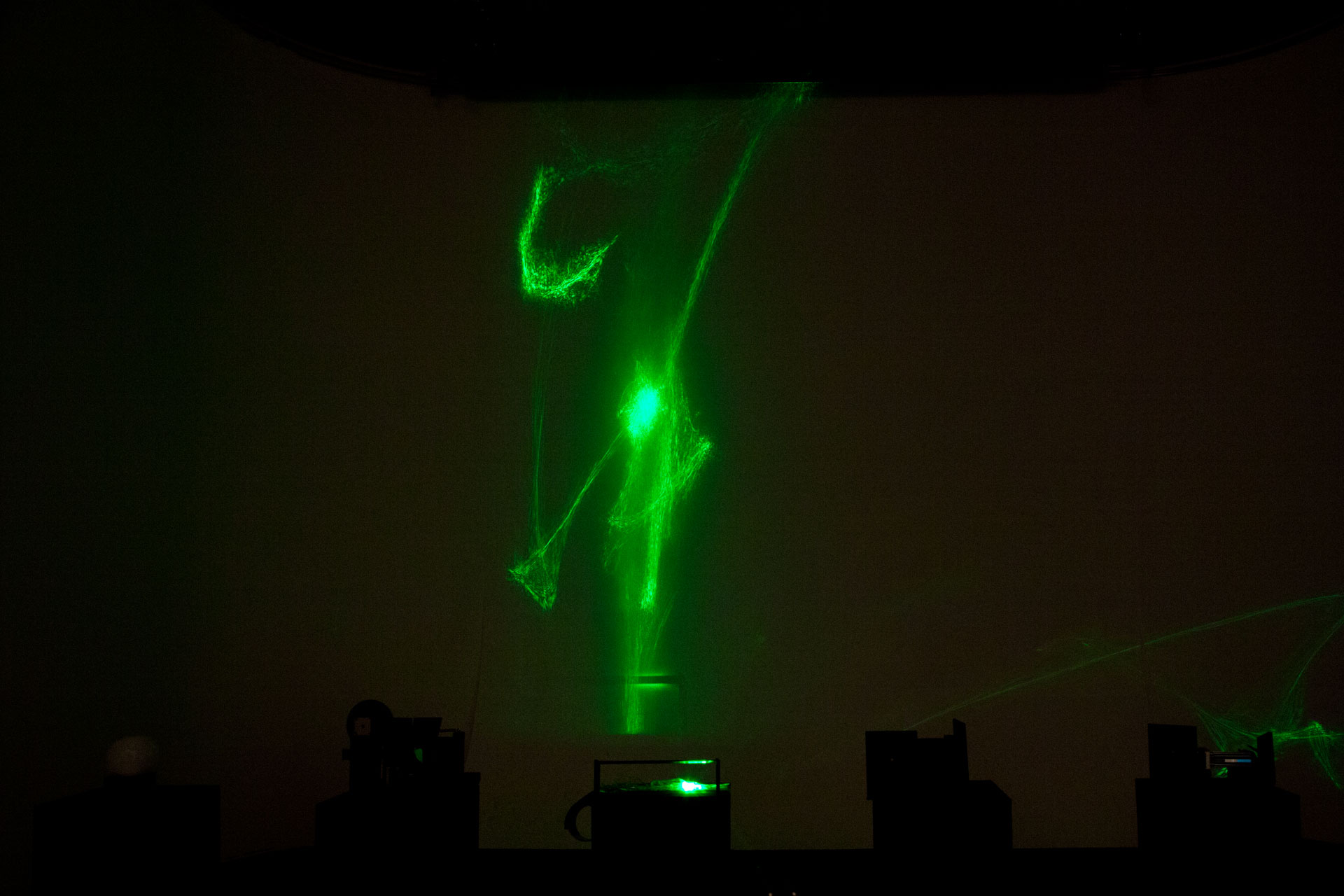 “Tape” is a module that forms an image by refracting, reflecting, and transmitting the laser light to the overlapped portion while folding a few cellophane tape. On the wall surface, images reflected by the outermost surface of the tape and images reflected and refracted after being refracted are projected in various directions. The viewer is aware of the shape of the very small reflective surface of the tape, the degree of irregularities and refraction of the material of the adhesive surface of the tape, etc., and it is loosened with the spot of the laser light cut in the spread space It will move to. Further, within the sequence, the movement speed is rapidly accelerated to the spot or moved in the opposite direction, thereby giving the viewer a feeling of running.

This module makes the viewer experience the practice of Nicola Scheffer. Scheffer, a French sculptor, will present works of art with light and movement since 1948. After that, we performed experiments of visual and music visuals and music, and in addition to Mohori-Nagai’s modeling technique, a group of works (Cyspe (1959) and Lumino variations (1969)) enjoying the effects of moving light by reflection boards and the accompanying sound And so on). The image of this tape, which constitutes the time axis by the reflected light of the modeled object, is positioned as a genealogy of their light arts that explored about moving shapes with a genealogy different from the movie, and the viewer traces its history Become. 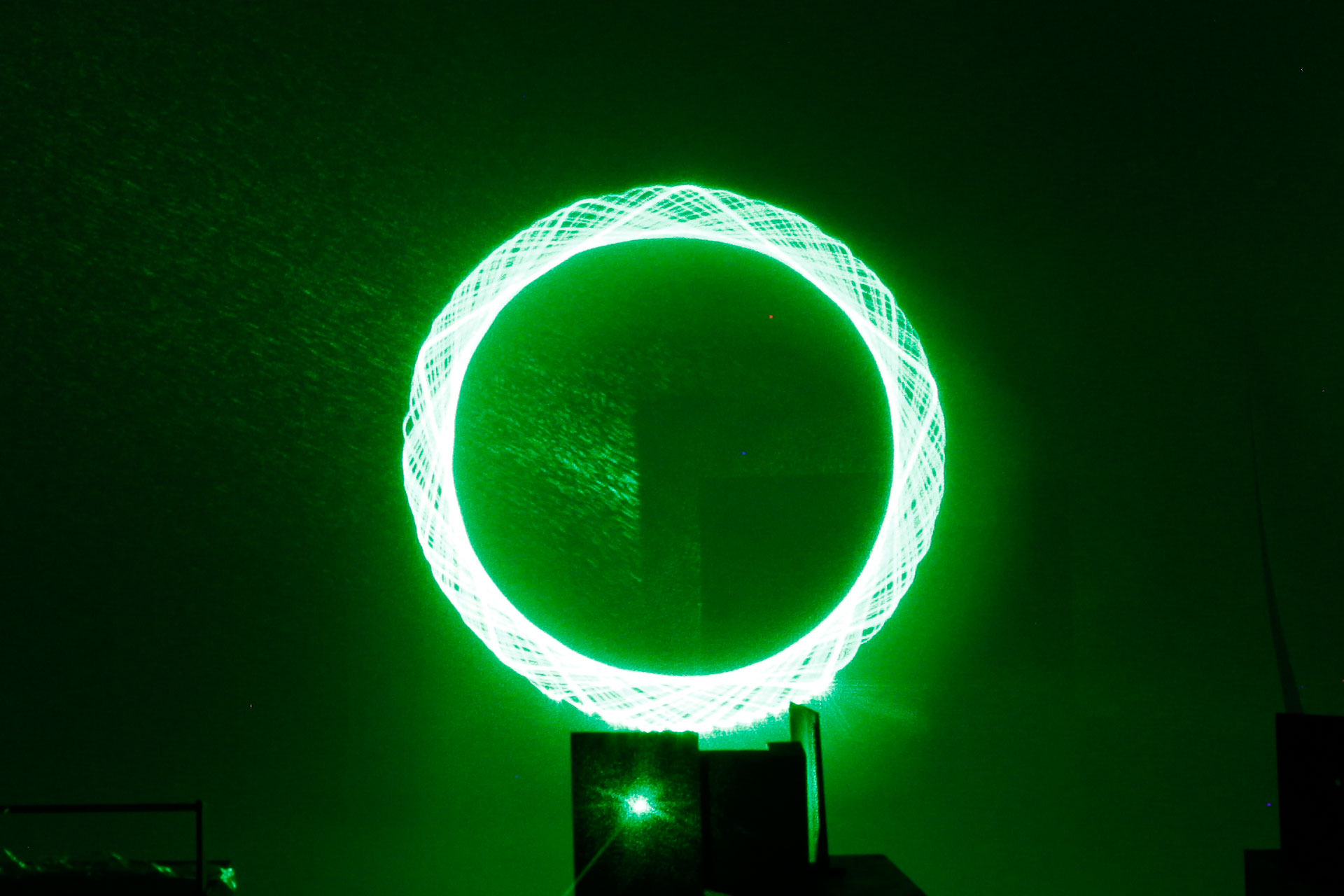 “Vector scan” is a module that displays arbitrary vector images by the galvano scanner. Unlike a spring, it is also possible to draw a figure with a corner, and in this work we draw a rotating polygon. The signal communicates with the ilda signal, and it uses an add-on (ofxIlda, ofxetherdream, ofxCV) of openFrameworks to draw arbitrary video with vector scan. Vector scan alone is produced on a framework basis, but vector scanning also draws shapes by moving the mirrors of the two axes at a high speed like spring modules. After being invented in the 1950’s, viewers participated in the mechanism of drawing by vector scanning spread in the 1970’s, and also watch evolution from mechanism like springs to vector scanning. 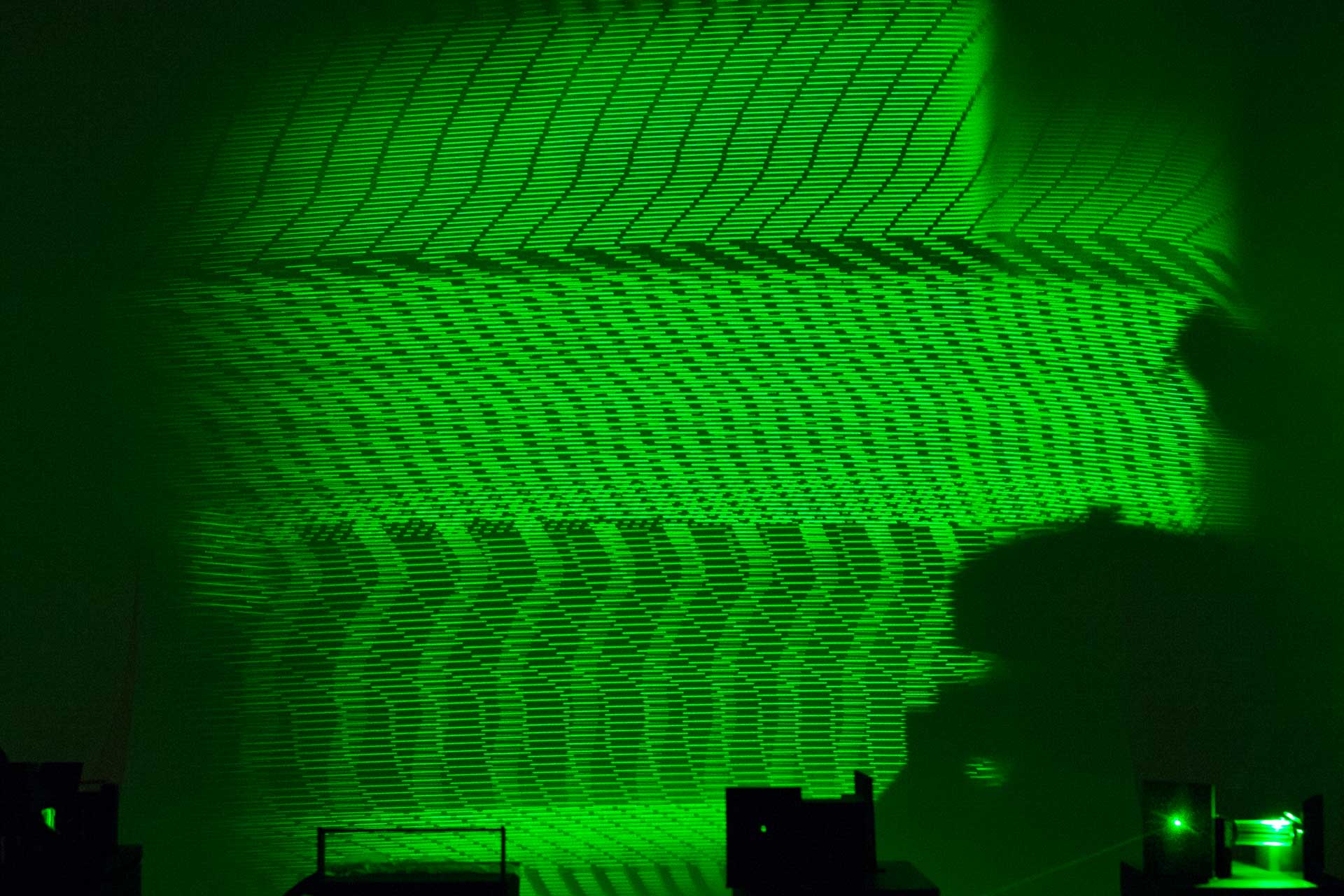 “Raster scan” is a polygon type rotating polygon type rotating in the horizontal axis direction (for laser printers) with a height of 5 mm, a self-made polygon type self-made with a laser cutter, a polygon type with a height of 70 mm and a height of 70 mm A scanning line such as a cathode-ray tube, and a random pixel by a laser pulse. Pixels are an important component of today’s immobilized image. In the raster scan, the horizontal axis direction motor first rotates to draw a horizontal line, then the vertical axis direction motor rotates, and a rectangular frame is generated. As a result, the viewer can know the principle of the movement of the scanning line and the pattern step by step, and confirm the concept of the pixel in the cathode ray tube TV which is not sold as of 2016.

“Liquid surface” is a small cup containing liquids of opaque color placed a speaker on the bottom of the cup, giving two frequencies to resonate, generate a symmetrix, distort the reflected light of the laser light irradiated on the liquid surface It is a module that manipulates patterns by not doing it. This image is similar to a tape in the sense that it is an image obtained by reflecting light, but while drawing the image by moving the spot, it draws by changing the shape of the reflecting surface itself .

Representation using Symantics is classified as Phenomena art using physics, chemistry, and hydraulics. Hans Jenny gave the frequency to the iron plate placed on the frequency generator in the 1970’s, and created an experiment to create the pattern, and created the term Simatex. It is not the tremor of the natural liquid surface like the wind, but an image that changes to a specific pattern and reproduces, the viewer will experience his practice of studying the control of natural phenomena by frequency and its relationship .